BADOTSCO is the first transport group to operate and cater to transportation needs of Tagbilaran City Domestic Airport passengers in 2006.

In its early formation, BADOTSCO was formerly known as ADOTAS (Airport Drivers and Operators Transportation). By June 29th of 2011, ADOTAS became a cooperative now known as BADOTSCO.

BADOTSCO and its members went through a tough time when the 7.2 Magnitude Earthquake happened on 2013. Operations were halted as members took their time to recover from the calamity and decided it's best to operate their own businesses as individual franchise operators.

4 years went by with slow but sure recovery, the members learned of the impending implementation of the new franchising guidelines. This led to a General Assembly held on March 2017. It was a fruitful meeting led to the election of new set of officers with the attendance of 65 members.

The desire to revive BADOTSCO paved the way to working out required papers for accreditation with appropriate government agencies.

On June 2017, DOTR - Department of Transportation issued the DAO 11 Series of 2017 otherwise known as the Omnibus Franchising Code that requires a minimum of 10 units for every tourist transport operators. This requirement ignited the tourist transport community to seek membership within the cooperative. 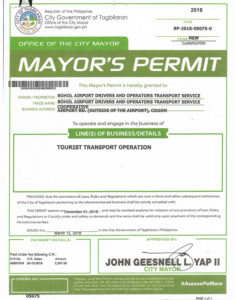 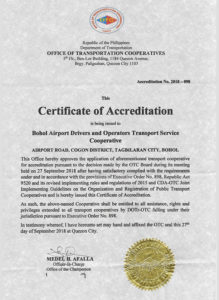 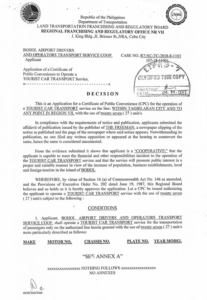 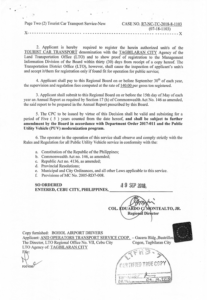 BADOTSCO at present is the largest transport cooperative in the province of Bohol. We now have 242 regular members, 55 associate members, and growing! If you are interested to become a member, e-mail or call us.

Board of Directors & Officers
+ -

Secretary to the Board: Abbygail Rufole